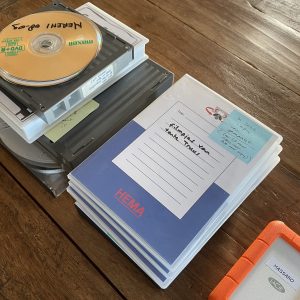 Around ten to fifteen years ago I had several old video tapes and Super 8 films converted to DVDs. This was because the Super 8 projector broke and was disposed of, and we understood that video tapes did not last for ever. These conversions saved the family films and travels from oblivion.

In the meantime, it has become clear that DVDs don’t last forever either. It was time to move on to the next level: convert everything to digital files. According to the experts, mp4 is the best format able to deal with any future changes.

Now that I am a professional photo organizer and am often confronted with this sort of issue through my clients and my membership of The Photo Managers, it has become a small step for me to take on board such a conversion project.

First, I made an inventory of everything. What have I got, what is the medium, and what is on it? If the latter was not evident from, for example, a title on the cover, then I used an old Super 8 viewer (that I had saved for that purpose) and an older MacBook with a DVD reader to inventorize everything. Luckily, the video tapes had titles, and some had already been converted to DVD.

The next step: determine which films should be ‘saved’ for future generations. Which are really worth the effort, such as the images of our life in Mozambique (even though they are a little blurred) and what not, such as a short film showing only well-known buildings in Florence. Old films are usually no longer of high quality, but old family films, however blurry, are worth keeping. Especially if they feature old street scenes. Images of earlier city trips are only fun if they feature people so that you can see how life was then. That was not the case with my Florence film. 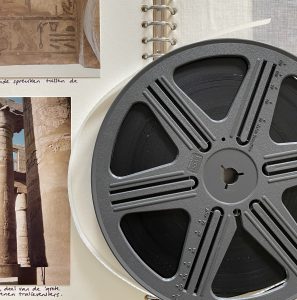 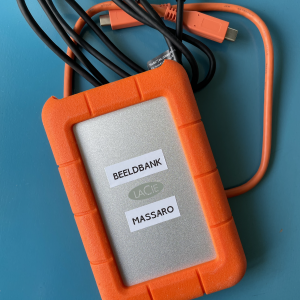 When it was clear for me which films should be digitized§, I took several video tapes to Trigger in Amsterdam, my professional partner for digital conversions. During the last conference of The Photo Managers, I met fellow photo organizer and conversion expert, Becky Ball. She was prepared to help me with the DVDs remotely. I was able to convert the DVDs to mp4 files using the appropriate programs. Trigger could have done that, but I like doing small collections myself, if it at all possible. I don’t want to become a conversion specialist, but I think that it is important to know what is needed and what is possible.

I am very happy that I have finished my own project. Everything has been examined, and the most important images are ‘safe’. All my mp4 files are now stored on an external hard disk that I have called ‘BeeldBank Massaro’ (Image Bank Massaro). And of course they are also stored on two back-ups.I have thrown away most of the old video tapes, Super 8 films and DVDs. I have saved only a few as ‘vintage’ examples.

I have still got two large reels of Super 8 films that I had previously not had converted to DVD. I was not sure then that I wanted them converted. They feature a trip around the USA and a trip to Egypt (all the cultural locations). I think that they are a bit boring because at that time I was trying to make real ‘documentaries’. And besides, I’ve also got nice photo albums (scrapbooks) of the trips. I will firstly review them with a Super 8 viewer, and then decide whether they can stay, and let Trigger convert them to mp4 files.

If so, then I would be pleased to help you sorting out what should be digitized! And taking care that that actually happens.

I am going to have the negatives of our time in Mozambique scanned, where the photos have all gone brown. Then I can make a beautiful photo album of the photos in their original colours.